We take an active stance regarding legislation that will impact our business community. As community advocates, we: 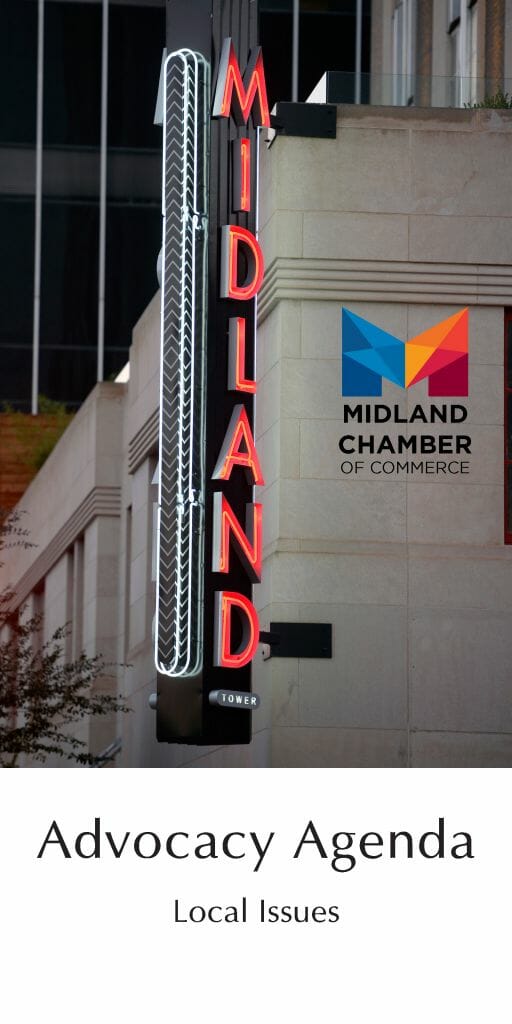 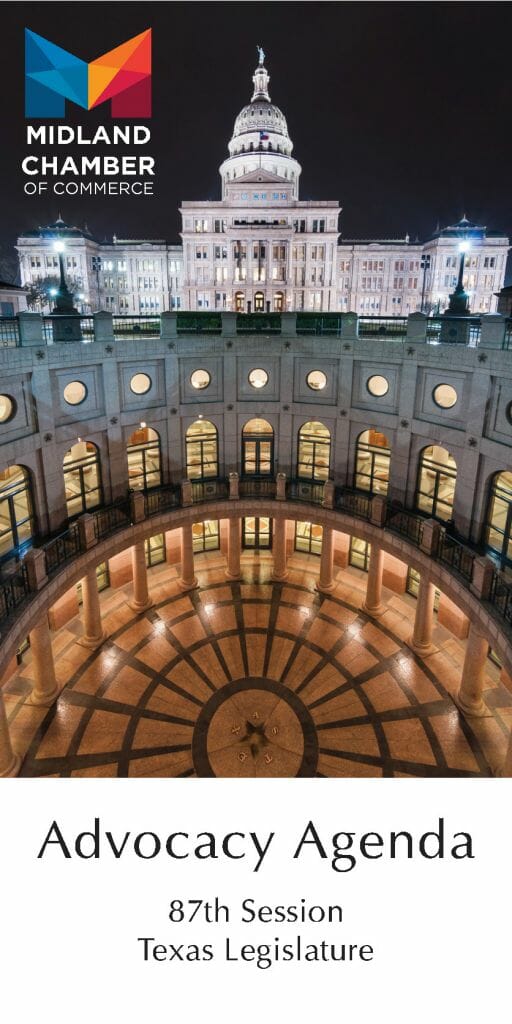 *This is completed every other year to advocate prior to development/submission of legislation, with interim changes made as needed. Primary document developed for distribution in non-legislative years. [Texas Legislature] 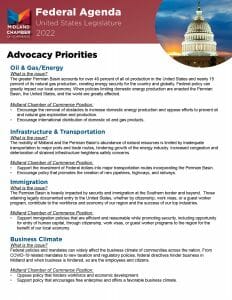 *This is completed every other year to advocate prior to development/submission of legislation, with interim changes made as needed.

We want to hear from our Members!

Submit your concern (local, state or federal) by completing our Action/Alert Request Form.

Our Government Affairs Committee will research the issue and make a recommendation to our Board of Directors.

While we will respond to every issue, we cannot guarantee that the Chamber will take action on every issue.

[April 25, 2022]
Letter of Support for Operational Enhancement of the Office of Innovation & Commercialization at the University of Texas Permian Basin

[August 26, 2022]
Signed on to the Federal Lands and Waters Energy Production Letter drafted by the U.S. Chamber of Commerce to urge the administration to strengthen our energy security by removing roadblocks to greater domestic energy production

[April 20, 2021]
Letter to Senate Finance Committee in support of HB 115 and The Field's Edge
View Document

Bill to Protect Small Businesses from Frivolous Lawsuits Passes House
WASHINGTON – Thursday, the House of Representatives passed H.R. 620, the ADA Education and Reform Act. This bill, which Congressman Mike Conaway (TX-11) is an original cosponsor of, passed by a vote of 225-192.
“The Americans with Disabilities Act (ADA) provides critical access to everyday life for millions of Americans who are living with a disability,” said Rep. Conaway. “Unfortunately, cash-hungry attorneys are taking advantage of the ADA by filing frivolous lawsuits against small businesses- many of which aren’t even aware of the very minor, technical offense they are being sued for. These predatory lawyers often don’t even live in the state, and rely on Google Earth to find local, small businesses to slap with a lawsuit and make a quick buck. Currently, our local businesses aren’t even given a chance to fix the violation before the lawsuit is filed, costing thousands of dollars in lawyers’ fees before the ADA violation can even be addressed.

“The legislation passed today gives small businesses a chance to focus their limited resources on increasing accessibility for disabled Americans, rather than fattening the wallets of out-of-state attorneys. The ADA Education and Reform Act protects all accessibility requirements of the ADA, and encourages businesses to act quickly to address any potential violations- a win for all those involved.”

On August 15, 2017, the Midland Chamber of Commerce's Board of Directors officially endorsed the Midland Road Bond and the citizens of Midland voted to pass the bond.

View a list of New State Laws to take effect on September 1, 2017

The Midland Chamber of Commerce opposed the Department of Labor’s overtime regulation. H.R. 6094

Update: U.S. District Judge Amos Mazzant, in Sherman, Texas, agreed with 21 states and a coalition of business groups, including the U.S. Chamber of Commerce, that the rule is unlawful and granted their motion for a nationwide injunction. Read more.

In December 2015, the U.S. Chamber led a coalition of 16 national trade associations in a lawsuit challenging the legality of EPA’s Clean Power Plan (CPP). In total, more than 150 challengers have filed suit against EPA, including the Chamber coalition, 27 states and a host of other business, labor and consumer groups. These suits have been consolidated into a single high-profile case, on the fast track to the Supreme Court, with massive implications for the American economy. The Midland Chamber of Commerce joined 166 other state and local business associations from 40 different states in an amicus brief filed in the U.S. Court of Appeals for the D.C. Circuit explaining the devastating economic impact posed by the EPA’s carbon regulations.

The Midland Chamber of Commerce's Board of Directors has adopted a position in support of the 2016 Tax Ratification Election (TRE) for Midland ISD.  Read the full position statement.

As part of the $1.1 trillion spending package passed by Congress, President Obama signed legislation into law effectively ending the oil export ban from the 1970’s.

Texas lawmakers approved open carry legislation allowing licensed Texans to carry handguns in plain view in belt or shoulder holsters. See a summary of new laws passed in the 84th Regular Legislative Session that impact Concealed Handgun Licensing. Private businesses may continue to prohibit the carrying of handguns, whether concealed or open, into their place of business. However, in order to do so, they must post signs on the property to prohibit entry by a licensed holder with a handgun. View examples of what the signs must look like.

The big statewide transportation measure was Proposition 7, and it passed with more than 86% of the vote. The measure raises money for road projects by dedicating a portion of sales tax revenue, as well as diverting a percentage of the motor vehicle sales tax.

Letter sent to the EPA regarding proposed Ozone regulations 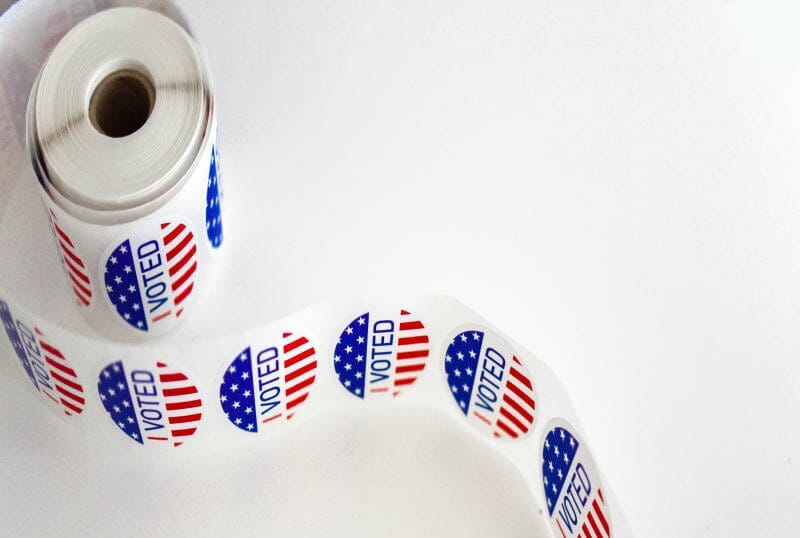